The Guild's Annual Exhibition is made possible by the generous support received from our sponsors.

The Guild is actively seeking sponsorship for its Annual Exhibition held each summer at the Mall Galleries in central London.

The exhibition attracts many visitors and interest throughout the world, through the quality of original art on display for the first time, a positive publicity campaign and engagement of artists and supporters.

The Guild is the leading and most successful art group in this genre attracting over 500 entries for the exhibition each year. Its senior artists are world leaders in their craft and include Michael Turner FGAvA (President), Anthony Cowland FGAvA, Gerald Coulson VPGAvA and Philip E West GAvA. We record the past, present and future of aviation and its aviators - why not join us.

Valuable publicity can be gained from association with the Guild's major event. Publicity posters and cards are circulated widely, coverage is given in aviation and other publications and the catalogue is a collector’s item; advertising in the catalogue is another possibility.

Companies, groups or individuals are sought to help support and be associated with our continuing success.

The Guild's 2019 Annual 'Aviation Paintings of the Year' Exhibition is sponsored by:

BAE Systems plc sponsors ‘The Aviation Painting of the Year’ award of £1000.

FlyPast Magazine sponsors the ‘FlyPast Fellows Award for Excellence' to the value of £1000.

The de Havilland Aircraft Museum sponsors their Trophy and award of £200.

Hansen Fine Art for their sponsorship.

Safran Group donates ‘The Messier-Bugatti-Dowty Trophy and Award of £100'.

Leonardo sponsors the Leonardo Trophy and award of £500.

The late Mrs Yvonne Bonham sponsored  'The Bonham Trophy and £100 Award' for the Best Group of Paintings by a Friend of the Guild.

Alison and Stratton Richey sponsors the 'John Blake Memorial Prize of £100' inmemory of John Blake VPGAvA. The prize is awarded at the Guild's AGM.

The Late Mr Walter Khan, has sponsored 'The Margaret Khan Trophy and £100 Cash Award' in memory of his late wife, Margaret Khan. To be awarded at the Guild's AGM. 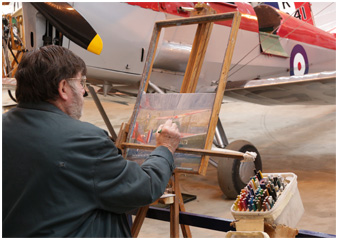